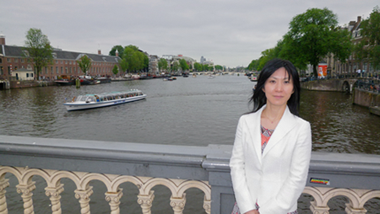 My name is Miki Suga (須賀 美紀：すが みき). I was born and raised in Aichi, Japan. I am a professional Japanese language teacher and I have lived and taught Japanese in several places around the world for over 20 years.

Here is a little about my career. I received a Master of Arts degree, majoring in International Communication at Nagoya University in 2002. After working as a university lecturer in Bulgaria and Kyrgyzstan, I became a Japanese-language senior specialist for the Japan Foundation, a Japanese administrative institution. I was sent by the Japan Foundation to teach at Sofia University in Bulgaria from 2004 to 2007. Following that, I worked as a full-time lecturer and a course leader for the Japanese-language institute, the Yamasa Institute in Aichi, Japan. Six years later I returned to the Japan Foundation as a senior specialist in Moscow, Russia from 2013 to 2016. While teaching Japanese at Moscow State University, I organised and conducted the Japanese-Language Course (JF language course) which targets the general public. I also trained inexperienced Russian and Japanese teachers regularly and ran seminars and workshops for teachers a few times a year. My activity report is posted on the JF’s website (only in Japanese.)

I have given lessons to individuals and groups who have different goals, from beginner to advanced (A1 to C2) and JLPT (Japanese-Language Proficiency Test) preparation classes. I have also created some courses, for example a short-term intensive course for beginners, a course specialised in improving speaking skills or a long-term course as lifelong education. I had been a member of the Society for Teaching Japanese as a Foreign Language in Japan for about 20 years and am now a member of the Association of Japanese Language Teachers in Europe (AJE). I am still making a continuous effort to provide you with the best lessons.

I have been living near Eindhoven in the south of the Netherlands since October 2016, started to give Japanese lessons online and established Amieke Online Japanese Language School in June 2018. In October 2018 I passed the Dutch language tests (A2) for the integration in the Netherlands. Now, while giving Japanese lessons, I am also brushing up on my English and Dutch. Over the years I have learned German, Russian and Bulgarian too, although I cannot speak them very well anymore. I would be very pleased if I could share the pleasure of discovering and learning new languages and cultures with you. If you have any questions or requests, please feel free to contact me.